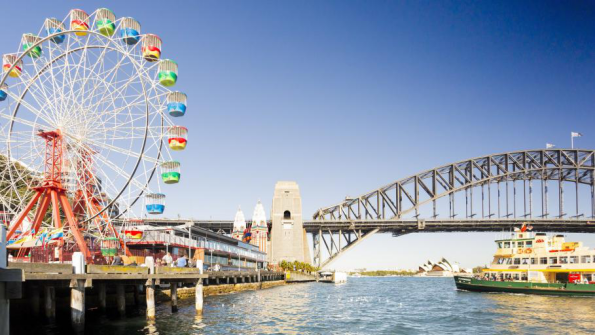 Often known as the 'Harbour City', Sydney is located on the waterfront overlooking the Pacific Ocean on the east coast of Australia. The city is the capital of New South Wales and home to the iconic Sydney Opera House and Harbour Bridge.

Sydney, and much of Australia, has brilliant subtropical weather all year round, with hot, sunny summers and mild winters. Due to its location in the Southern Hemisphere, the seasons are reversed in Sydney. February is still summer time (December - February), so the weather is hot and sunny with high humidity, caused by the chance of the occasional down pour.

In February, the average daytime temperatures in Sydney stay around the 23°C mark while high temperatures can hit a scorching 26°C on some days. The average minimum temperature rarely ever drops below 19°C which means that night times are still warm. February is the most ideal time to visit Sydney if you like very hot climates, as it is the one of the warmest months of the year in the city.

There's also plenty of sunshine in Sydney in February. The month sees around 8 hours of sunshine per day on average and a 19% chance of a sunny day, which allows plenty of time for hitting Bondi Beach and soaking up the rays on the soft golden sand.

February is also a great time to swim in the sea or learn to ride the waves of the Pacific. The average ocean temperature around the coast of Sydney is of 23°C which is more than comfortable.

February is one of the warmest months of the year, and if you love summers and are more of a ‘sand, beach and sun in a metropolis’ type of a person, Sydney is the place to be.

Women : Shorts and tanks are perfect for this kind of weather. You can go for skirts and blouses, capris and half-sleeve tops or stick to shorts and t-shirts.

Men : Bermuda shorts, Shirts, T-shirts, and cotton vests, cotton and linen pants or trousers. Your attire will also depend on the kind of activities you wish to indulge in.